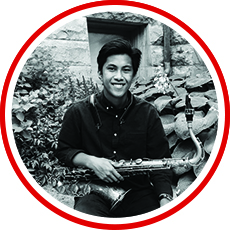 Arman Sangalang is a jazz saxophonist, composer, and educator based in the Chicagoland area. He completed his Bachelor’s degree in Jazz Studies at Indiana University Jacobs School of Music where he studied with Greg Ward, Tom Walsh, and Walter Smith III. While at IU, he also privately studied clarinet and flute. In the fall, he will begin a Master’s Degree in Jazz at Northern Illinois University studying with Geof Bradfield.

Throughout his career, he’s had the honor of playing with notable jazz artists such as John Raymond, Dave Stryker, Todd Coolman, Jeremy Allen, and countless others. As a leader, Arman has had a few projects like the Maté Trio and the Sangalang/Fain duo which regularly played at local venues around Indiana. He has also been a sideman on projects that have performed at notable venues including The Jazz Kitchen, Taste of Bloomington, the B’Town Jazz Festival, The Bishop, and many more.

In addition to being an active performer, Arman has a passion for education. He has taught at Stafford Music Academy in Bloomington, IN. Arman seeks to help students find a balance between what they enjoy in music while also challenging them to go outside their comfort zones.