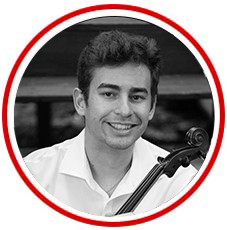 Austin Cruz is a graduate student at the NIU School of Music where he is pursuing his Master’s degree in music performance and is the recipient of the Dutton Foundation graduate assistantship. He started playing the viola in third grade with the School District 105 Orchestra Program in La Grange, IL. In high school, he formed a quartet with fellow members of the orchestra and were hired to perform at several events. Austin toured Italy and France with the Lyons Township High School Orchestra both as a sophomore and then as the principal violist in his senior year.

Austin received the Music Apprentice Scholarship through Grace Lutheran Church in La Grange, IL to help further his music education. He was a member of Art Explosion United, a non-profit group of musicians that raised money for various organizations. Austin also performed in the Windy City String Ensemble and recitals with the Michael Hining Violin and Viola Studio. Through his association with the Studio, Austin began teaching students on the violin and viola which sparked his interest in music education.

After graduating high school, Austin decided to take a gap year to further develop his technique on the viola. He was awarded the Winston Cassler Scholarship to study Music Education at St. Olaf College in Northfield, MN. He rose to assistant principal in the St. Olaf Philharmonia under Martin Hodel and was promoted to the St. Olaf Orchestra under Steven Amundson. As a junior, he interned at Central High School in St. Paul, MN, where he assisted and taught both the school band and orchestra. Austin holds a Suzuki Violin Book 1 teacher certification from the Greater Pittsburgh Suzuki Institute and plans on advancing his Suzuki certification in the future. He has a passion for teaching and finds great value in one-on-one education. Austin is currently studying with Anthony Devroye. His former teachers include Michael Hining and Ray Shows.