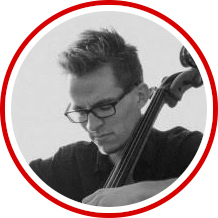 Brandon Rittenour has performed as a cellist and conducted throughout the Northwest, Carnegie Hall, Austria, and the Czech Republic. He began studying cello under the direction of Dr. Roberta Bottelli, then later with Dr. John Marshall, student of Janos Starker. Since high school he has coached cello, chamber performance, and conducted at various summer music programs in the Northwest. Through these experiences he discovered his passion for supporting the development of young musicians.