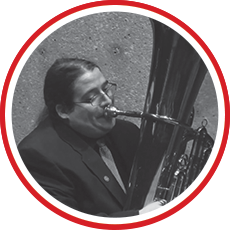 Matt has been a musician of the tuba now for 20 years as well as being diverse and experienced in all of the low brass and upper brass instruments and has been playing professionally through most of those years. He is a graduate from Northern Illinois University and received his Bachelor of Music Performance in Tuba. Matt studied with Professor Charles Schuchat through his degree at NIU and played in all the major wind and jazz ensembles at NIU.

Matt is currently gigging and teaching around the Chicagoland area on Tuba as well as Euphonium, Tenor/Bass Trombone, and Bass Guitar with some of his more unique performances playing Millennium Park with the NIU Jazz Orchestra and in the pit orchestra for the Wheaton Drama Musical, The Addams Family. Matt is also a member of the Spring Valley Concert Band primarily playing tuba and subbing in for Trombone and Euphonium when needed.