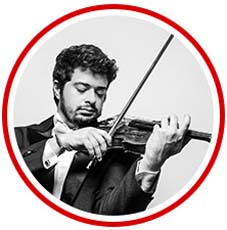 Ranan Antonini began his studies at age 13 with the Suzuki method in Rio de Janeiro, Brazil. One year later, he made his debut, playing at the 97th-anniversary celebration of the Municipal Theater as a Suzuki Student from the Cultural House of Rio de Janeiro.

Ranan has been teaching since 2015 and was named principal violin professor of the Social Action Music Program, a program designed for young people (8-18). That same year he was invited to go to Caracas, Venezuela to play and learn about “El Sistema” program, created by Jose Antonio Abreu and coordinated by Gustavo Dudamel, who studied under Abreu’s baton.