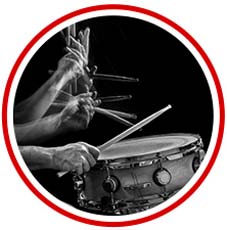 Ben has over 20 years of professional percussion experience in both teaching and performance. But, his musical journey began long before that while growing up in Texas and Missouri. After playing clarinet in his middle school bands, he caught the percussion bug while being immersed in the rich musical environment found in and around St. Louis, and the rest is history. Some of his St. Louis percussion teachers include Thomas Stubbs (St. Louis Symphony Orchestra), Michael Farris, and Glen “Papa” Wright. Ben is also fortunate to have been able to train and perform with some of the most talented young musicians in the St. Louis Symphony Youth Orchestra (Leonard Slatkin, consultant). Ben later chose to make percussion his career and, upon a recommendation from his high school band director, traveled to Northern Illinois University, a school known for its world music, jazz, and percussion education. His primary instructors were Rich Holly and Robert Chappell. Ben earned a Bachelor of Music in Percussion Performance in 1998 and is fortunate to have performed at the Percussive Arts Society International Convention in Atlanta, GA with the N.I.U. Steel Band, under the direction of Al O’Connor and Cliff Alexis, and also during their Taiwan tour, among other things.

After graduation, Ben traveled to Nashville, TN to pursue a career in the studio scene. He was fortunate to meet and work with some great people from various parts of the Nashville music industry for over 10 years. He also marched 3 years with the DCA drum corps Music City Legend and also helped start the corps from the ground up in 2003. Other unique experiences while living in Nashville included working for several years at Treeworks Chimes and Row-Loff Productions.

Ben currently teaches band in the Wheaton CUSD 200, maintains another private studio in Sycamore, and freelances in the Chicagoland area. He is also Percussion Coordinator and Percussion Arranger for the Racine Scouts Drum and Bugle Corps. In the fall of 2013, Ben started his own summer drumline activity for area percussionists called Cadence Percussion. More information can be found at www.cadencepercussion.org.

Ben is a member of the Percussive Arts Society and Illinois Music Educators Association. Ben desires that all percussionists, regardless of age or skill level, learn the techniques and skills needed to be a well-rounded percussionist (i.e. mallets/snare/timpani/drum set/electronics) while having some fun too!