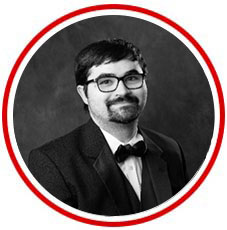 Matt Alfrey has been singing and playing piano since he was 2 years old. A classically trained lyric bass, Matt completed his Master of Music in Vocal Performance from Northern Illinois University in 2020. He has performed a diverse repertoire, from classical and opera to musical theater and contemporary pieces.  His most recent role was in the 2019 NIU Opera performance of The Pirates of Penzance, in which he played the Pirate King. Matt has sung compositions in English, German, Italian, and French with pronunciation from the International Phonetic Alphabet (IPA). He has over eight years of music theory as well as extensive training in pedagogy and the Bel Canto method.

Matt also graduated from North Central College in 2018 as a music major, having received scholarships in voice, percussion, and piano. Matt is currently a member of the professional ensemble, Cor Contiamo, in addition to teaching at The Music Connection, LLC and doing solo work in local churches. As a member of the 2014 All-State IMEA Honors Chorus, Matt has also worked with local high school students helping them prepare for their IMEA auditions.